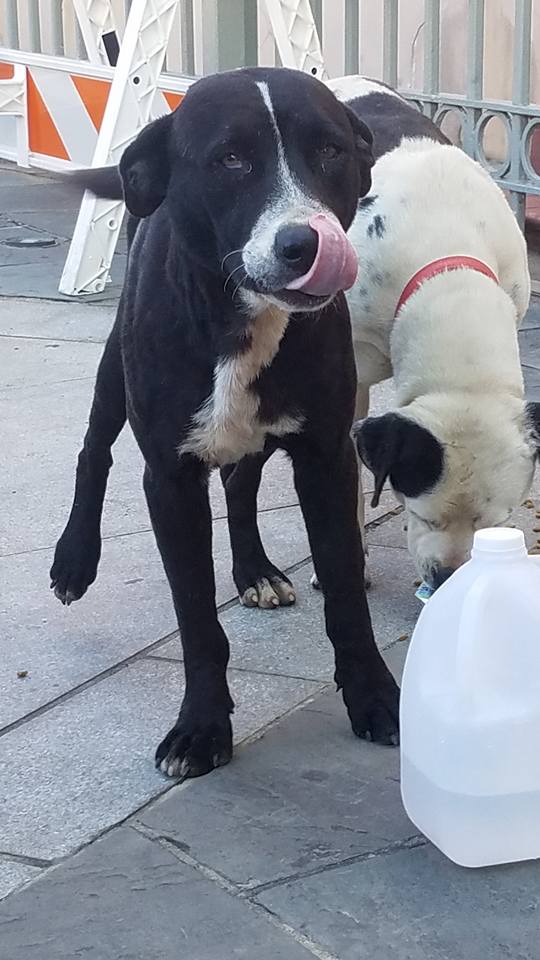 Once upon a time, there was a beautiful, black dog who wagged his tail with such glee, that it was almost impossible for an onlooker to see the depth of his pain…

But this is no fairytale…  This filthy, emaciated boy could only hobble due to what appeared to be a severely broken leg, yet he followed us for a few blocks, asking only for a little attention.  We met him for the first time on January 28th, in the small port town of Fajardo, Puerto Rico, which had been ravaged by hurricane Maria several months before.  In her wake, Maria left countless dogs to fend for themselves when their owners had to evacuate the island and leave their beloved pets behind.  Some, whose homes were destroyed, would never return.  But let’s get back to the black dog, as this is his story.

We were on our way to catch the ferry to the small island of Vieques where we planned to stay until the following day, when this lonely fellow entered our life.  As he continued to follow us to the ferry, we knew that we could not leave Fajardo without at least providing him with a sorely needed meal.  We found a small restaurant and bought the 3 remaining chicken empanadas for the dog, which he accepted with much appreciation and gentle grace.  We still had time before the ferry would be leaving, so we rushed to the store and picked up a bag of dog food for this poor soul.  Unfortunately, he was nowhere to be found when we returned from the store.

As we stepped off the ferry the following day, our hopes of finding the black dog were quite high, but dwindled steadily as the day wore on and it became apparent that our search would go unfulfilled.  We had shed many tears thinking of the plight of this black dog, and it was a heart-wrenching, helpless feeling to know that time was running out, and there was nothing we could do.

Upon returning home to New Hampshire, we spent several sleepless nights thinking of this lovely being who had unwittingly left his mark upon us.  It wasn’t long before we resolved to return to Puerto Rico in hopes of finding him again.

On March1st, we boarded a plane for San Juan, with a cautious hopefulness that we would be able to locate the black dog, and even dared to believe that we might find a way to bring him back to the US.  The first day proved unsuccessful, but we did speak to a local man who told us that he had seen this dog, and that he usually came around early in the morning.  The next day we were in the car at 6am, making the 45 minute ride to Fajardo with a renewed sense of hope.

The tears are streaming down my face as I write this next part, when we were finally reunited with this beautiful boy after almost 5 weeks of wondering whether he was still surviving.  My heart nearly exploded as I sobbed with joy when we spotted him, even though his condition was still very bleak.  We immediately named him Marcus, as he had indeed, left his “mark” upon “us”.  It took a lot of patience, but we finally coaxed him into the rental car, and once inside, he relaxed on the backseat, exhausted from all the stress and fear.  I’m sure that the backseat of that Kia was the most comfortable surface he had ever felt under his tired, aching bones.

We took Marcus to a very kind veterinarian in Campo Rico, who did blood tests and took x-rays that told a very unfortunate story.  Apparently, Marcus had been hit by a car as we suspected – but not just once.  The vet could tell from the level of healing of each injury, that Marcus had been hit on at least two occasions, with probably a few weeks between the incidents.  Incredibly, Marcus’ leg was not broken; rather he had at least 3 fractures to his hip bones.  The vet explained that Marcus was not putting pressure on his leg in an effort to decrease the pain he felt in his hips, which was what caused him to hobble.  It is also the reason that he was unable to scratch the tics off his face, as dogs typically use their back legs for this purpose.

Marcus has been neutered and given the required vaccines, but he is severely underweight, and has also tested positive for ehrlichia and heartworm.  The vet said that the prognosis for Marcus’ hips is not yet clear, but he suspects that he will experience some level of pain that will have to be managed for the rest of his life.  He is being treated for ehrlichia now, and must stay in Puerto Rico until he is healthy enough to travel.

The inspiration for Hearts and Tails Animal Alliance is a direct result of our deep desire to give Marcus his long overdue, and well deserved “happily ever after”.  Perhaps this will be a fairy tale come true, after all.