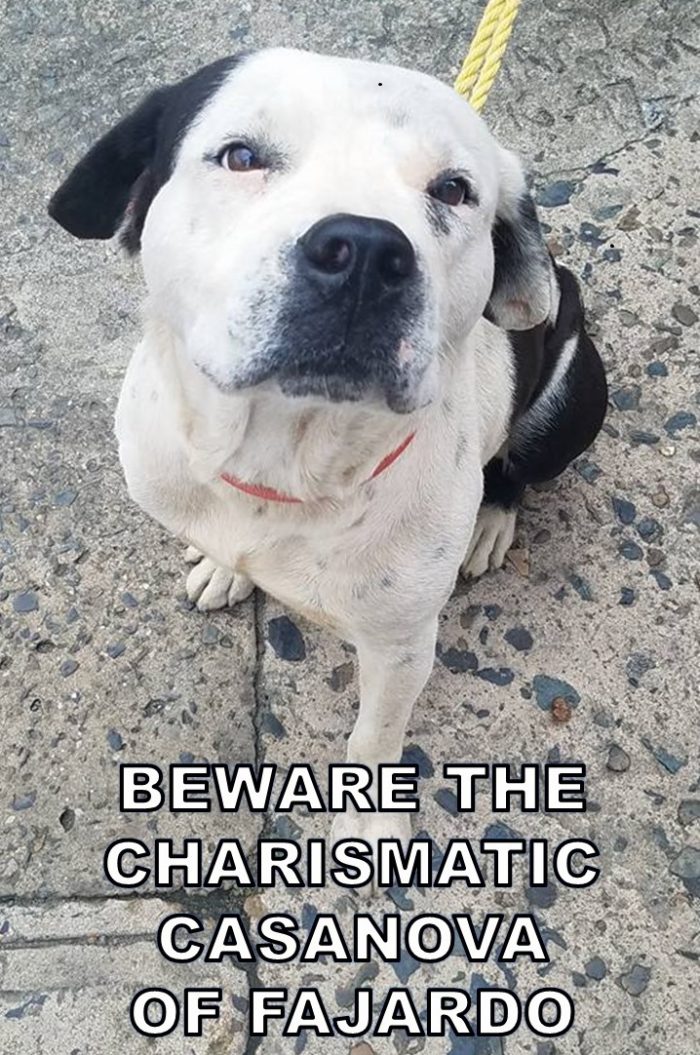 Melanie and Xavier arrived in San Juan very late on Wednesday, March 29th, exhausted from a day fraught with travel delays. Feeling that they had not come to Puerto Rico to sleep, they were up at sunrise the next morning determined to find The White Dog. Each armed with a cup of caffeine, they climbed into the car and set off on the 45 minute drive to Fajardo. This became their routine each day; driving to Fajardo as the sun came up, showing Liam’s photo to every person they met, and asking folks to take their phone numbers and call them right away if they spotted the dog.

They quickly learned that everyone in Fajardo knows “Liam” – I mean EVERYONE. A quick glimpse at a picture of him invoked a smile from all the neighbors; including the people who work at the restaurant where he hangs around, the security guards at the ferry who work the day shifts, the police officer who guards the parking lot at night, and the man who cared for him, but wasn’t allowed to have a dog in his apartment. And many others.

On the 5th day of searching, they were feeling less hopeful that they’d be able to locate Liam during this trip. Leaving no stone unturned, they ventured deeper into the residential areas, and noticed a couple coming out of their house in the wee hours of the morning. As they had many times before, Mel and Xavier presented the couple with Liam’s photo, and were stunned when the man and woman smiled and exclaimed in unison, “Bobby! Bobby con la Cabeza Grande!” (which translates to Bobby with the big head!). It was a bittersweet revelation to learn that Bobby (aka “Liam, The White Dog”) has a family who lives a few houses down. The couple expressed appreciation (and some amusement) at the story of their efforts to find and help “Liam”.

As it turns out, Bobby has friends all over Fajardo. He has at least two different people believing he’s their pet, two different restaurants feeding him, and countless others who simply admire him as a gentle street dog (sato) – when in fact, he’s just an incredibly sweet, smart and resourceful boy.

Although we are thrilled to know that Bobby is not a “sato”, it is still obvious that he needs additional care. Also, as an unneutered male, he roams the neighborhood freely and has likely sired many of the pups who are satos from the day they are born. Perhaps the next visit to Puerto Rico will warrant a visit to Bobby’s family, to find out if they are receptive to our assistance.

While part of each morning was spent in search of Liam/Bobby, Mel and Xavier spent the remainder of each day bringing some dogs to the safety of the shelter, and providing food and water to those who they were unable to take in. The shelters are currently overcrowded and unable to take in additional dogs until we can provide them some relief by transporting the adoptable dogs to the United States.

If you are interested in saving a life by adopting or fostering a dog or cat, please contact us at hatadmin@heartsandtails.org.